Zach and Brock came back this afternoon and finished everything up. I have to tell you they did an amazing job, we are so happy. Zach was so helpful, informative and patient with all my questions. The liner looks great and it was clear they take pride in their work… they even cleared out the leaves that started falling in the pool while they were waiting! We are so happy with our experience from first speaking to you in a panic after our rip and all your support and help co-ordinating right through to the finished product. You all have been so wonderful.

We are Pool Shoppe clients for life!!

Thanks again and have a great weekend! 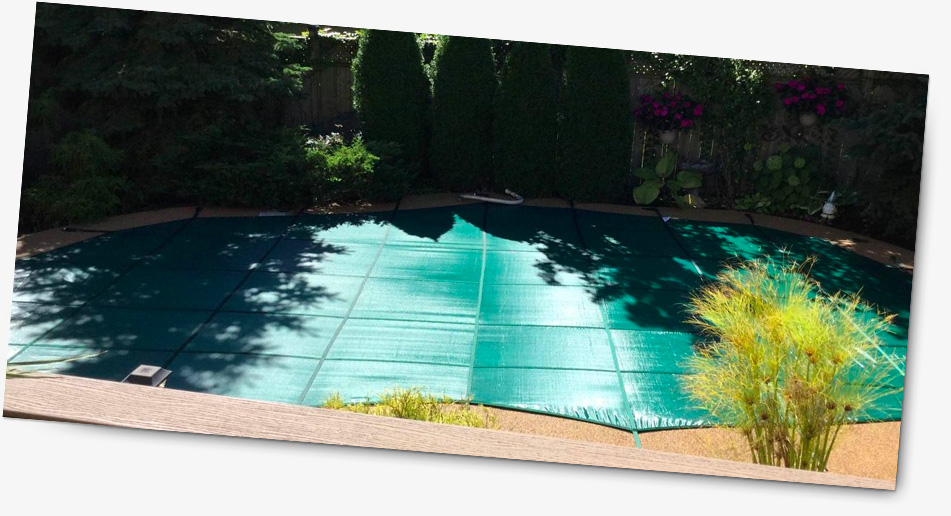 Thought I would send you a pic of our new safety cover.

Dave and his partner in crime did a fabulous job. The installation went off without a hitch, other than a brief rain shower.

Once again the pros at The Pool Shoppe came through with flying colours. We really like the cover and safer environment, plus we hopefully have eliminated our duck problems in the spring.

Luke and I would like to thank the Pool Shoppe for everything! We appreciate your communication with us about every process.

Donna was great at helping us decide to purchase a pool and was great in answering all our questions.

The guys who came out to install the pool were respectful and answered all our questions effectively.

The guy who came out for the orientation was awesome!! He was so thorough and helpful!

We really appreciate it! We cannot wait to enjoy the pool and continue our business with the Pool Shoppe!

A few weeks back I had a new liner installed and just wanted to say WOW! We have had many compliments on how it looks and feel great that we went with The Pool Shoppe.

About 10 years ago we had a liner installed (a company down the road from you) and it was a nightmare from the day we hired them. Phone call after phone call trying to find out when it was going to be done. They broke the coping taking old liner out and never said anything. From the first year on the liner would not stay in and they told me “oh it’s new you can put it back in yourself!” Okay enough of that, the reason I’m writing is to say thank you to Liz – from the day we hired The Pool Shoppe, I had phone calls explaining everything going on and when it would be done. Zach & Pete (hope I got the names correct), the guys who did the work, were exceptional explaining all the procedures. If we were out, they left notes on what they had done and when they were expected to be back.

Just wanted to follow-up with you regarding the recent dismantle and move service provided by Dan and his team.

To premise, I was in the Billiards industry for many years and played the key role in developing a corporate structure for Billiard Mechanic Certification for the now long-gone Dufferin Games corporation.  I have seen billiard mechanics across the Country and Dan and his team rank amongst the best I’ve seen! It’s clear Dan is passionate about his trade and its reflected in his work. Small things people may take for granted such as: punctuality, courtesy, cleanliness and knowledge were exemplary. It was a 30-year-old, unique Dufferin model pool table and I expected a number of issues to arise. Dan and his team experienced none and the table is in the same stellar condition now as when they first began dismantling it. Please extend my gratitude, compliments and feedback to Dan and his team. Fantastic experience.

I really want to thank you for taking the time to help me trouble shoot. It is not often someone is willing to help you solve an issue with no cost associated.

I have in the past and will continue to support the Pool Shoppe for all my pool supplies/needs. Your customer service and willingness to help has made me a customer for life!

Just purchased the Hamilton spa a couple of weeks ago and we are enjoying it immensely! Our friends had purchased a spa from you in January (I know…brrrr…. our crazy friends!!!) and I am so happy that they recommended that we go to The Pool Shoppe. Service was excellent from both Donna and Brad and we will definitely be recommending The Pool Shoppe to more friends.

Thank you for your patience and expertise in our purchase.

Sharron and Russ, Caledonia ON

I just wanted to express our deepest thanks from my wife and I to The Pool Shoppe for providing such a great experience as first time buyers of a hot tub in your store. Thank you to the staff, Ed, Lisa, Susan and the boys who delivered our hot tub, and for removing the soft tub we had in our yard which was greatly appreciated.

It’s been a pleasure doing business with you and we look forward to a continued relationship in the years to come. If in the future we know of anyone looking for any of the products you provide we will gladly refer them to you.

Thank you for your kindness and hospitality…

I just wanted to send a little note about Liz.  I recently had a new liner installed by your company and dealt with Liz starting last year.  Every step of the way she was helpful, informative and nothing less than a pleasure to deal with (even with my 100 stupid questions).  Liz kept us up to date every day on where and what the crew would be doing and our entire transaction was seamless.  We love our new liner and will definitely recommend Liz to our family and friends.